Maxillary hypoplasia, or pseudoprognathism, is a bone malformation in which the upper jaw is underdeveloped, giving the face a prognathic (protruding jaw) appearance that is apparent but in many cases not real, hence it is also known as “false prognathism".

In most cases, this malformation is a developmental anomaly, although it can also be caused by external factors, such as poorly planned dental extractions.

This malformation creates the illusion of a prominent jaw and nose, even if both sides have a normal size and in correct proportion to the face.

In a large part of the cases of pseudoprognathism, the maxilla is underdeveloped not only in the anteroposterior plane, but also presents deficiencies in the vertical or transverse plane, giving a sunken appearance to the middle third of the patient's face, and making both the nose and the jaw protrude and appear very prominent, even if they have a normal size and are in correct proportion withe the rest of the facial features. 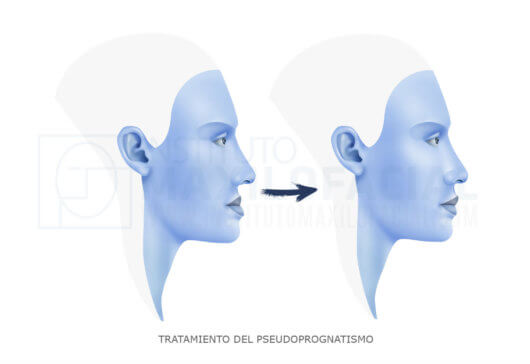 The indicated treatment for pseudoprognathism is a monomaxillary orthognathic surgery, usually of maxillary advancement combined with other movements (descent, rotation, etc.). On the other hand, in some cases the lower development of the upper jaw leads to a compensation mechanism in the lower jaw; leading to cases in which the patient presents both mandibular prognathism (prominent jaw) and maxillary hypoplasia. In such cases, the treatment should be a bimaxillary orthognathic surgery, which will correct the position of both bone structures at the same time.

Once the maxilla is in place, the patient's features look softer and more balanced, and the nose gives the illusion of being smaller, even if its size hasn't really been changed.

If you think you might have maxillary hypoplasia, contact our specialists by calling +34 933933185 or write to international@institutomaxilofacial.com

Where should the bones be placed to achieve greater harmony?