Should plates be removed after orthognathic surgery?

Should plates be removed after orthognathic surgery?

Years ago,  fixation devices in orthognathic surgery were mainly steel wires, plates and screws to fix the jaws in their new position. Today, fixation is accomplished with the help of titanium plates and screws that are placed internally during surgery.

Titanium is a fairly soft metal that has the unique property of being biocompatible, that is, it does not cause a foreign body reaction to bone. In fact, after some time, bone cells adhere directly to titanium, without the need to interpose a fibrous layer between them, as happens with other types of metal implants.

Still, some patients have different concerns about titanium plates: Will they activate metal detectors at the airport? Will they affect their health in the long run ? Should they be removed?

The shortest answer is: it is not necessary, although there are some exceptions to consider: After a while, titanium integrates seamlessly with the bone, so, strictly speaking, it is not necessary to remove the fixation plates, unless the patient's body has any kind of negative  reaction. The plates also do not trigger airport alarms or other metal detectors. 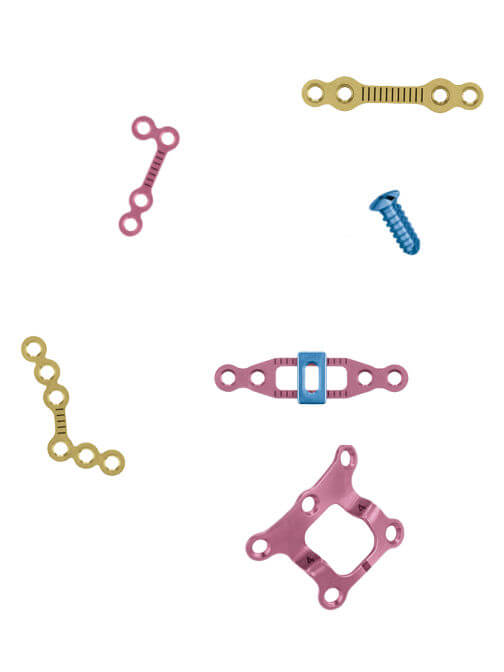 In most cases, removing the plates involves an unnecessary surgical procedure for the patient, with its inherent risks and drawbacks. Therefore, the recommendation is not to withdraw them unless clinically indicated.

Removal of the titanium plates is indicated when there is a fracture of the plates or when they are exposed through the gums due to poor tolerance. Once exposed, the plates are susceptible to infection and must be removed. Infection can manifest itself mainly with symptoms of pain, intraoral abscess, inflammation of the area, plaque exposure and sinusitis in the case of maxillary plates.

Ideally, plate removal should be performed three months after surgery, when the bone is already consolidated. It is a simple procedure that is performed under local anesthesia on an outpatient basis, although with the pass of time the procedure becomes more difficult, as the plates gradually integrate with the bone. That is why it is not recommended to remove the plates after one year has passed since surgery.

In general, fixation plates do not need to be removed after orthognathic surgery, except on rare occasions. In such cases, the procedure should be carried out after the bone consolidation process is complete.

In orthognathic surgery, only a small percentage of patients require the removal of plates or screws, and even in these cases, it is important to bear in mind that the removal of plates is not synonymous with treatment failure, since normally infected plates are removed after a stabilization period that allows osseointegration. As patients, it is very important to note that smoking increases the probability of infection of the fixation plates.

How to reduce swelling after orthognathic surgery